When I was young I imagined that Halloween was for children.

Halloween was all costumes and candy and imaginary play. It was as an escape from reality, an opportunity to gaze into another world, to pierce the veil of what is real and true.

We use to go block to block in our costumes, we called it Trick or Treating, we carried pillow cases slung over our shoulders, taking candies at nearly every door we knocked on, with nearly every bell we rang.

We scoffed at the people who only handed out little bibles or tubes of toothpaste, and shunned those who handed out home-made fare, thinking they were doing something good.

We would rather have nothing at all than have those things, and they quickly found their way into the trash; all those little popcorn balls, boxes of raisins, apples and bibles.

With fondness I recall the drill that came at the end of the night, searching through our candy piles, looking for suspicious things, open packages, search for pins and needles and razor blades.

We understood that some people hated children and would slip these into the candies.

I never found anything dangerous, never once in all of those years, but the fear that there could be, haunted us for real.

Halloween is not all fun and games, though, it has a deeper meaning than we were taught as children, and a much longer history.

Halloween is not just about ghosts and goblins and friendly witches.

In the celebration of Halloween an ages old conflict is present, a real struggle between the Christian Church, and the “Old Time Religion,” the customs of the pagans, paganus, pagani, the country folk and their persistent traditions that lurk just beneath the surface of the Christian rites.

On the Christian Calendar; Halloween is All Hallows Eve, a celebration of the honored dead, of all the saints who had passed before, who have already gone to meet the maker.

For the old pagans; whose traditions are tightly interwoven with the Church, Halloween is a celebration of the dead, plain and simple, of all of the dead, of the saints and sinners who have passed from this world together.

Halloween is an acknowledgment of the dead whose spirits walk among us still, good and bad, honored or not.

In modern times the holiday has been largely stripped from its affiliation with Christianity, celebrating the dangerous, the macabre, the frightening and the weird, those qualities and characteristics that every person hides within themselves, because they are in fear of the world.

I was fourteen the last time I went Trick or Treating, and really, I was only chaperoning my younger brother then, I was not dressed up, but I took some candy nonetheless.

In that same year I remember the Pastor at my church lamenting the popularity of the pagan festival. Believing that the Christian feast should be honored above it instead, to the exclusion of anything else.

There was no fun in that, there was no fun in him. He was just an old man watching his tradition fade away, being usurped by those of another generation, by children who were less committed to the Church than he was when at their age.

In the years that followed, the number of children who go out in costumes seeking candy has declined by 25%, so the media outlets say.

Halloween is no longer considered safe or wholesome; it has yielded to the real dangers of the real world.

For me it is just another day, Halloween, I do not believe the dead walk with us. I have never seen a ghost, or any evidence of magic, as far as national holidays go, this one is an anomaly, though my maternal grandmother was born on this day.

There are real horrors in the world, we have a pumpkin colored demagogue for a president, spreading fear, night and day and lying to us at every turn. We are in the grip of a global Pandemic that is the claiming the life of an American citizen ever ninety seconds.

We are three days away from a national election where the prospect of reelecting this made man is all-too-real.

So now that I think about it, today of all days we should all be thankful that we have this day to luxuriate in the fantastic and the surreal. 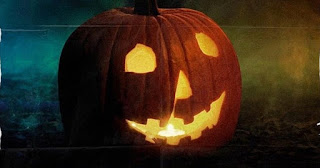