Let us forgo the celebration of Christopher Columbus and the extraordinary crossing he made with Nina, the Pinta and the Santa Maria, and recognize what a monster he was.

I learned this refrain in grade school: In 1492 Columbus sailed the ocean blue. He set out on his adventure, sailed in pursuit of fame, wealth and titles and vanity. He sailed across the Atlantic four times and back; he became wealthy and famous, he earned the titles he sought, but his vanity was never satisfied.

Christopher Columbus was an Italian from Genoa and he was born in obscurity. As a boy he went to sea where he learned the skills and the knowledge that brought him to a captaincy.

In this aspect he was remarkable and deserving of respect.

He became an adventurer in the service of Ferdinand and Isabella, the monarchs of Spain. He made his first voyage for them in 1492, setting sail on September 6th, and sighting land in what we now call the Islands of the Bahamas on October 12th. He named the island that he landed on San Salvador; exactly which island this was is now lost to memory.

He expected to be in Asia, but to his surprise, and to the surprise of everyone back in the Spanish and European courts, there were other continents and other oceans they had yet to traverse in order to get to India.

They still wanted a westward route to India, but they were more than happy to discover the truth for themselves and learn the real shape of the world.

Columbus opened up these continents and all of their peoples, to the incessant appetites and cruelties of the Europeans, to their hunger for gold, and for land and for war.

He never sailed past the Islands of the Caribbean. He never set foot in what came to be known as the America’s, and his life after his first voyage was not without controversy.

He became wealthy and earned titles, but he was also arrested, jailed and relieved of his governance, before eventually being released.

His heirs did not inherit the titles he had earned, he never entered the true nobility. He died at the age of fifty-four, a sailor from Genoa bearing the meaningless title Admiral of the Ocean Seas.

His coming to the West, was the beginning of the end for countless peoples, for tribes whose names history did not record, peaceful people who were captured and enslaved, and worked to death, the encommendero system marked by genocide and the tyranny of Spanish rule began with him.

Columbus’ journey was one of historical significance, we should take note of it, but the truth should be told and not celebrated.

Columbus was a petty man, reckless and pitiless and a harbinger of death. 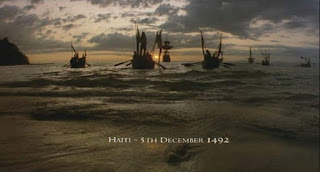