When I was still a teenager, when I was beginning to move away from the various worlds of science fiction and fantasy that occupied my imagination, when I began to leave the acid washed pages of my comic books behind, as I was moving past the authors I had been introduced to in school, the so-called American novelists, such as Lewis, Fitzgerald and Steinbeck, it was then that I discovered Dostoyevsky, and a whole new dimension of literature became open to me.

This was the crossroads where literature became philosophy, and the human condition was laid bare.

Through the great Russian novelist I came to understand the power of narrative, its effectiveness at conveying certain truths that no human being can escape the grip of, and for whatever reason there are no authors more adept at this function than the Russian’s, with Fyodor Dostoyevsky being the foremost practitioner of this craft.

His influence on me was profound.

From Crime and Punishment and Notes from the Underground, to The Idiot and the Brothers Karamozov, which are perhaps his most famous works in English, I spent years reading his corpus, all the way through my twenties and into my thirties I tracked down his cannon, until I was left with translations of his notebooks to read…which I did.

I purchased the notebook for A Raw Youth at a used bookstore in Minneapolis (Majors and Quinn), one summer when I was on leave from the Navy. It was the first of these that I discovered; in those pages I could see the way Dostoyevsky constructed the arc of his stories, how he developed his characters from ego to id, from false-self to true-self, from, privilege to despair.

I also found an Imperial Ruble, tucked into its pages, a bookmark left behind by whoever was last to read to it.

The note was wrinkled and faded but still a treasure to me.

When I discovered Dostoyevsky I came to consider him as the father of existentialism, and through him I learned to love Dickens, who Dostoyevsky considered to be the greatest author of all time.

It has been one hundred and forty years since Dostoyevsky went down into the dirt, his influence has not waned, and we have not changed, his insight into the dilemma of human existence remains, I think it is even more pertinent in this—the digital age. 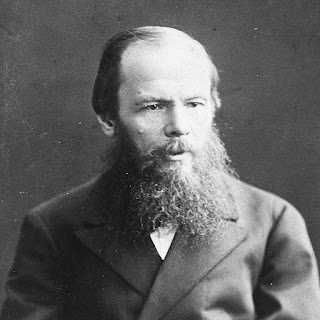