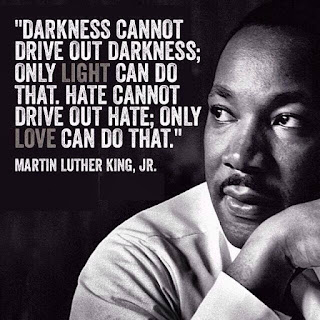 Today we celebrate the life and work of the Reverend Doctor, Martin Luther King Jr., a man who more than any other, fulfilled the role of our nation’s conscience.

Martin Luther King had no more, and no less access to supernatural powers than any of us, what made him different was that he chose to listen.

There are many memes circulating today, like the picture I have pasted in this essay.

Today we are given countless opportunities to reflect on his likeness, to consider the words of the good Reverend Doctor, an American Saint if there ever was one, and we are wise to do so.

We are wise to remember the man, Martin Luther King, a rare person whose measure exceeded the ordinary flaws that make us all human, he lived beyond them.

Martin Luther King transcended even death, though he was taken by the assassin’s bullet, he lives now in our collective consciousness, in our global psyche, dwelling there as if in myth, a human being, a child of God, a man filled to overflowing with grace and wisdom.

He spoke truth to power, and gave hope to the powerless.

He was once considered to be the most dangerous man in America, and he became our most beloved hero, the prime exemplar of what it means to be, an American.

He was beaten and arrested dozens of times, for the crime of seeking justice.

His life was threatened daily. His reputation was smeared without regard for the truth, or his selfless works.

He was, and continues to be an example to us all.

Our prophet, he is still pointing to the way, lighting the long journey that still lies ahead of us, the journey the rest of us have yet to make.
Posted by Big Sugar Buddha at 4:14 AM
Email ThisBlogThis!Share to TwitterShare to FacebookShare to Pinterest
Labels: @CollectedWriting, @jaybotten, American, Beloved, Doctor, Essay, Hero, Holiday, Martin Luther King Jr., MLK, Prophet, Prose, Reverend, Saint