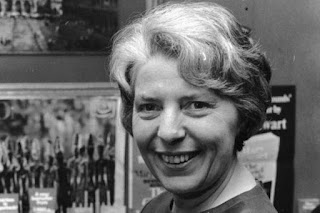 I read my first book by Mary Stewart in the summer between fifth and sixth grade, it was titled The Crystal Cave, and it was the first book in her Merlin trilogy.

The Crystal Cave opened my eyes to many things, among them was the notion that there were actual historical antecedents for Camelot and King Arthur, subjects that I had been fascinated by for a couple of years at that point, but which I thought were figures of myth and legend.

Mary Stewart wrote this book from the perspective of Merlin, she set the time in the fifth century CE, the period of time when Roman influence was waning in the British Isles, her books linked the rise of Arthur to a Roman dynasty.

The figures in her stories, Uther Pendragon, Merlin, Igraine and Arthur were presented with a kind of grittiness that made me believe in them. They were already mythic figures in my imagination, but through her narrative they became real; I felt connected to them.

Through her discussion of Mithraism I came to be interested in the real history of Christianity. I became a researcher, and I began to question everything that I had been told was true about the origins of the Church.

I cannot thank her enough for this.

If I had not read Mary Stewart I may never have become a theologian, if my interest in those things had not been peaked by her authorship, I would not be the person I am today, and for that she is a hero of mine.

Her books had an oversized influence on my life, though I did not read much of her body of work beyond the Merlin Trilogy, but I read everything I could get my hands on concerning King Arthur, including the work of Mallory, the La Morte de Artur, and all of the variations of that text which flowed from it.

From Mary Stewart I learned about many other things, I discovered the real presence of Arthurian myth in European culture, how it served as a beacon of hope, providing my ancestors with a set or mores and a code of conduct that instigated and promoter the chivalric ideal, while at the same time becoming a vehicle for subversion, as in the Albigensian Heresies, and other counter cultural movements around the turn of the tenth century.