As a Roman Catholic Theologian, and a student of philosophy, Saint Katherine of Alexandria is my patroness.

I have this image of her, painted by the renaissance master Raphael tattooed on my right arm.

Her legend tells us that she was born in Alexandria, Egypt around the year 287 CE, and that she died as a martyr during the reign of the Roman Emperor Maxentius c. 305.

She was broken on the wheel; she was tied to it, impaled on its spikes, and crushed beneath it as it was rolled through the streets.

Katherine was only eighteen years old but gifted with a rare intellect. She was from a wealthy family and used her fortune to hold salons where she invited pagan philosophers to debate with her and other Christian scholars on matters concerning the central tenets of the faith and the doctrines of the Church.

Katherine is always depicted in the saffron and ochre robes of the philosopher, which had been the tradition throughout the ancient Near East and Hellenistic Civilization since at least the time of Socrates (mid-fourth century BCE). It is likely that these colors, and their association with philosophy come from the Buddhist missionaries travelling west from as early as the sixth century BCE. 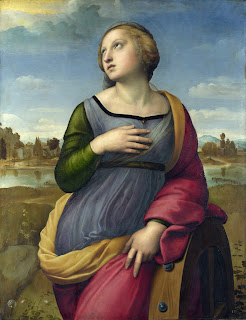