When I finally made it to the university, I went to a school named for this man, The University of Saint Thomas, in Saint Paul, Minnesota, named for Saint Thomas Aquinas; I studied philosophy there, as well as theology and the classics.

It was a grand place, it felt like a university, with its tall stately buildings made from massive blacks of light tan stone, Minnesota sandstone quarried from the river bluffs nearby. The moment I passed through the arches into the quad I felt like I had arrived.

My time at this school was reasonably well spent. Saint Thomas prepared me for advanced studies elsewhere, and I continued my theological work, though not as exhaustively as our Patron Saint, his Summa Theologica remains a unique achievement in the history of Western thought, more important for the mode of thinking he transmitted his ideas in than for the conclusions that he made.

Saint Thomas bridged the gap between the ancient philosophers: Socrates, Plato, Aristotle et al, and the proto-renaissance period of Western Europe, re-discovering the use of intellectual tools like such as formal logic and discursive reasoning, and re-employing them in a way that allowed Europeans to leave the Dark Ages, clearing the way for the Renaissance, the Enlightenment and the Age of Reason that followed.

Saint Thomas was Italian by birth and a member of the Dominican order, a scholastic, and he was famous in his day. He died while making a pilgrimage on the Appian Way, death took him at the Cistercian abbey of Fossanova, and the monks there, fully cognizant of his fame, knowing that he would become a saint of great renown, they coveted the relics of his body.

They boiled his carcass down and polished his bones, preserving all of the water for distribution in the relic-trade, they refused for years to turn his body over to his Dominican brothers, parceling out his bones and the water bit by bit over time, keeping his skull until the very end.

The University of Saint Thomas has a vial of that water in its collection of sacred artifacts, a silly business, really, and beneath the dignity of the intellectual giant that Aquinas was known to be.

On his death bed it is reported that he gave an estimation of the value of his own contribution to the doctrine and dogma of the church, of which he said: everything is just straw.

There is a prayer that Thomas wrote carved into a column of the main entrance to the school grounds, the same arches that I first walked through my first day on campus, two stories below the offices of the Philosophy Department. I recited it aloud every day that I attended classes on the campus in Saint Paul.

It is a prayer that I carry with me still, as if it were written in my heart:

That I may ardently desire,

What is pleasing to thee

For the praise and glory

In the year 2021 CE, seven hundred and forty-seven after the death of Saint Thomas, the world has become enmired in another kind of dark ages, which is odd and sadly ironic because the current tide of anti-rational, anti-intellectual sentiment that has griped the world has been seeded through the prevalence of digital media platforms that are in themselves a function of our mastery of light, as a means of communication.

We now find ourselves leaving in a cultural milieu that disdains the truth, scientia, science and knowledge, which undermines place of reason in public discourse.

Let me be clear, I am not suggesting that there is anything inherently ominous in the pattern I have articulated, the numbers themselves are arbitrary and it would be unreasonable to suppose otherwise. However, we would be wise to acknowledge this, the descent of darkness has a cycle all of its own. We have fallen into this before and we are susceptible to falling into it again, once we have fallen, it could take centuries to emerge back into the light. 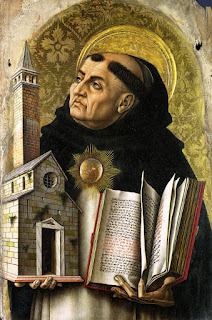