The Feast of Saint Oscar Romero – Patron Saint of the Americas, Servant of God, and Martyr of the Church

Oscar Romero became the Arch Bishop of San Salvador in 1977, at the age of sixty.

He was assassinated three years later.

He was murdered because her refused to give up his ministerial work on behalf of the poor and disenfranchised people of his country, killed for speaking out against the abuses they suffered at the hands of the ruling class, conditions of systemic poverty and virtual slavery with no recourse to the law or justice of any kind; they endured forced internment, torture and the imposition of the State in their religious life, including denying them the right to worship and receive the sacraments. Oscar Romero stood against these abuses and for that he was martyred.

Saint Romero was considered to be a scholarly and aesthetic man whose appointment to the Arch Bishopric was intended to be un-controversial and un-threatening to the political regime of El Salvador.

Once he was elevated to that position of trust and authority he began to speak out against the abuses of power he witnessed the people enduring every single day.

In his sermons, his writings and his radio program he spoke out against them:

“In less than three years, more than fifty priests have been attacked, threatened, calumniated. Six are already martyrs--they were murdered. Some have been tortured and others expelled [from the country]. Nuns have also been persecuted. The archdiocesan radio station and educational institutions that are Catholic or of a Christian inspiration have been attacked, threatened, intimidated, even bombed. Several parish communities have been raided. If all this has happened to persons who are the most evident representatives of the Church, you can guess what has happened to ordinary Christians, to the campesinos, catechists, lay ministers, and to the ecclesial base communities. There have been threats, arrests, tortures, murders, numbering in the hundreds and thousands.... But it is important to note why [the Church] has been persecuted. Not any and every priest has been persecuted, not any and every institution has been attacked. That part of the church has been attacked and persecuted that put itself on the side of the people and went to the people's defense. Here again we find the same key to understanding the persecution of the church: the poor.”

Saint Romero bore witness to these atrocities while they were happening and because of it he was murdered.

Soon we may be called to stand-up and bear witness to the abuses of our own government, against the dismantling of our democracy, the abandonment of constitutional government and human rights abuses not seen in this country in generations. 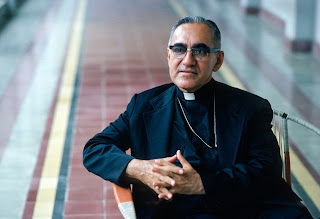